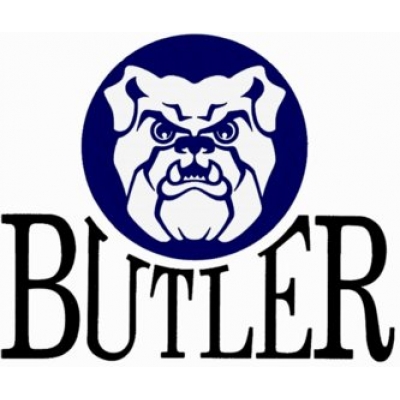 Why am I a Butler Fan?
It’s a great question to ask of any basketball fan, and I think being a Butler fan matches several of my favorite memes about sports: the Underdog, the Team Effort, and the Unexpected.

The “Underdog Effect”
Some people like to root for the Yankees – I like to root for the little guy. Perhaps this attitude stems from my youth as a Philadelphia Phillies fan (admittedly, the past few years of Philly dominance in baseball have created cognitive dissonance here, but roll with this), or my belief in the Horatio Alger nature of great sports stories. Little team manages to … by the force of effort, magically defeat a favored team and win glory.

The “Team Effort”
A lot of successful underdogs are great teams, especially in college basketball. I’m not sure if this is due to the fact that the great players have not yet matured beyond freakish individual skills or just due to the observation that great coaching beats great individual performance.

Butler matches both the Underdog and the Team Effort meme, replete with a gutsy, workmanlike center (Matt Howard) and a flashy guard shooting from everywhere and fighting like a boxer through a cut over the eye (Shelvin Mack).

And they made a great run in this game, coming from almost 10 down, lulling Florida to sleep, making great plays and simply wanting to winmore than the Florida players.

Unexpected
Why did Florida suffer brain lock at the end of regulation and make a questionable shot that had little chance of success? Why did Butler manage to make a run at a crucial point in the game? (Who cares 😉

So, I’m a Butler fan because they are a scrappy team, have a great coach, and clearly have a lot of heart. (And o hai, they made the Final Four last year, so even as an 8 seed, they’ve got serious basketball cred.) Enjoy the March Madness.

Why are you such a Butler fan?